American Staffordshire Terrier vs Pitbull – which breed is best for you?

American Staffordshire Terrier vs Pitbull: these are the two breeds that are actually often mixed with each other. They look very similar, and even a dog enthusiast might not always be able to make a distinction. But are they really the same breed with slightly different colors or are there some significant differences? 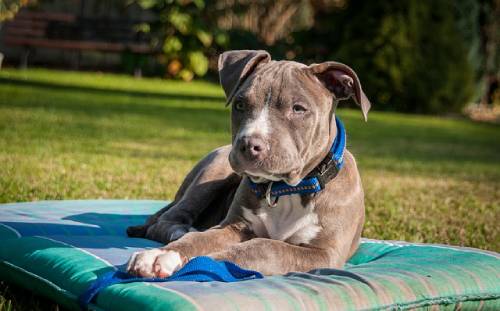 In short, they are almost the same dog, except American Staffordshire Terrier has a strictly defined breed standard whereas Pitbull allows variations. Another significant difference pertains to the temperament of the two dogs, and the traits they were bred for. American Staffordshire terriers have been bred for decades to strengthen excellent temperament qualities such as friendliness towards people, absence of aggression, stable nervous system, as well as visual characteristics in accordance with the breed standard.

When it comes to pitbulls, they were bred to strengthen their fighting qualities. This includes their ability to win in a fight with another dog. But never with a human! In fact, just as in American Staffordshire Terrier, good breeders strive to breed any aggression towards humans out of the breed.

But let’s look at the two breeds in more detail.

American Staffordshire Terrier vs Pitbull: origins of the two breeds

To compare these two breeds, we should start by looking deeper into the history of American Staffordshire Terrier and Pitbull. How did we get these two breeds as they are today? 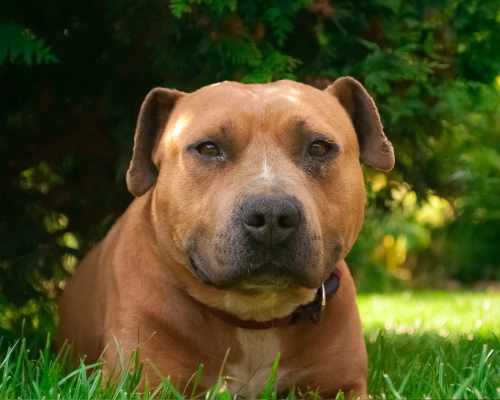 American Staffordshire Terrier takes its roots from Old English Bulldogs and English Terriers, extensively cross-bred around 18-19 century in the United Kingdom. It is unknown who exactly cross-bred these two breeds. What they got, as a result, is bull-and-terrier, which is an ancestor breed for such modern breeds as both American Staffordshire terrier and pitbull. At that time, the dogs were used in dogfighting, as well as ratting.

However, by 1835, the new law established in England finally prohibited such inhumane entertainment as animal fights. By then, there were plenty of dog lovers that enjoyed both  American Staffordshire Terrier and Pitbull breeds for their companionship and the wonderful qualities these two breeds possess. At the same time, breeders and dog lovers started paying more attention to the dog’s exterior rather than fighting qualities.

That was when the two breeds started getting more defined and different from each other, each going their separate ways. American Staffordshire terriers were now used as farm dogs and guard dogs as well as house companions for city dwellers. They were bred as loyal, friendly, loving dogs – so different from their “fighting” ancestors. The breed became most popular in the US.

Pitbulls are said to be brought to the US by the Irish migrants around the middle of the 19th century. Those dogs, called Old Line dogs, went through multiple transformations and were exported back to multiple European countries. They also spread throughout the states, eventually becoming what Pitbull is today. 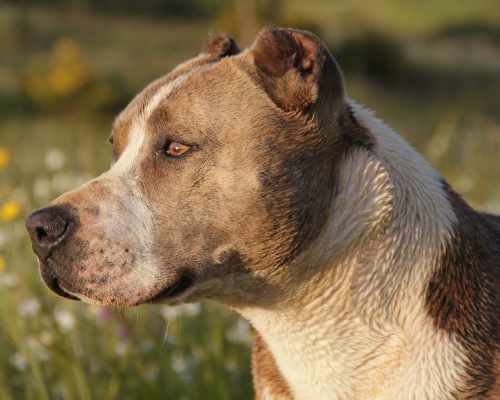 American Staffordshire Terrier and pitbull can indeed look very similar. Even dog experts might not always be able to tell the difference. However, here are a few things to note as far as differences between these two breeds go.

In terms of coloring, Pitbulls and amstaffs can have similar markings, except amstaffs can never be white fully white. Also, amstaffs only have black noses, whereas pitbull noses can be black or red. Other than that, an amstaff can be particolored, brindle, and any regular solid color except white. Pitbulls can be black, black with white markings, blue, tan, red, white, fawn and other colors.

In terms of the shape of head and body, an American Staffordshire Terrier will be larger and stockier than a pitbull. Amstaff’s head is wider than a pitbulls.  Amstaffs generally have wider, more muscular chest, whereas pitbulls have slightly narrower chests.

American Staffordshire Terrier, despite its negative reputation (similar to one of pitbulls and bull terriers), can make for a great pet provided they are raised by the right owner. Genetics and centuries of breeding made it a strong-willed but stable-temperamented, calm dog. Amstaffs are friendly, outgoing, energetic and smart. They can be stubborn and self-directed but also loving and tender at the same time. 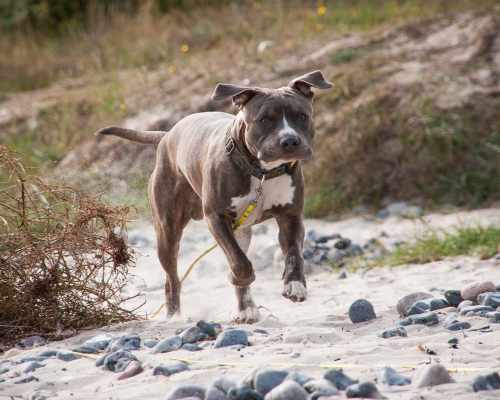 Amstaff running on the beach

Although aggression towards humans has been bred out of them, this isn’t necessarily the right dog for a first-time dog owner.  Nor for someone who doesn’t want to invest time into raising their amstaff correctly. They require timely socialization, plenty of exercise, and plenty of training, especially when they are young. An amstaff in the wrong hands can become a powerful – and destructive – weapon. It can become a danger to society, as well as the owner themselves.

When it comes to pitbull, everyone knows they are strong-willed dogs capable of excelling as fighters and guard dogs. However, not everyone knows that they are also extremely intelligent, funny, quirky, outgoing and not very aggressive! A well-bred and well-raised pitbull terrier is very likely to be very mild-temperamented and calm. Of course, every dog is different, both due to their nature (genetics) and due to their upbringing and training. 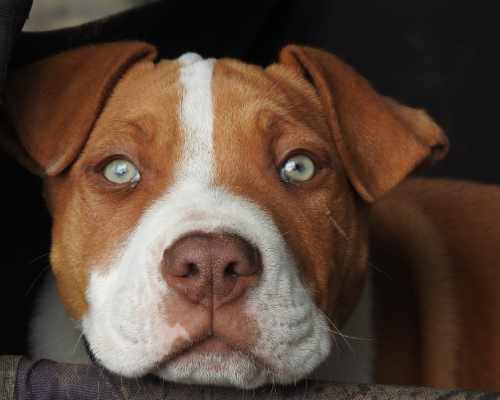 You may meet a pitbull that’s a bit more stubborn than average, or more aggressive, or less intelligent. But, truth be told, it is usually up to the owner to make sure they are raising their pitty correctly to help them fully blossom into the best dog they can. Most pitbulls, if raised well (socialized at an appropriate time, trained, etc) are wonderful dogs to be around. Just like we can see from bull terrier history, pitbulls have a fighting past, which means they were specifically bred to be non-aggressive towards people. Up to this day, this is one of the more prominent traits of the breed.

Of course, that same working (fighting) past makes some pitbulls particularly motivated and stubborn. And of course, pitbulls can be very fearless. This, in addition to their physical power, makes it very important for an owner to invest sufficient time into training. Pitbulls are extremely powerful. They don’t attack humans often, but if they do attack a human, the consequences can be severe. This is why any pitbull that has displayed aggression towards a human has to be corrected, or, if ineffective, destroyed.

Intelligence is another pitbull trait that stems from centuries of genetic selection. It was crucial for a fighting dog to have a very good idea of what they were doing at the ring. Memory, attention, cunning and intelligence were all important traits that were encouraged and bred for. No one would compare a pitbull to a border collie, but they might as well be right next after them in terms of intelligence.

Although American Staffordshire Terrier and pitbulls normally have a similar lifespan, an amstaff might, on average, live a bit longer. It is usually 13 years for pitbulls, whereas amstaffs can reach 15 years of age. 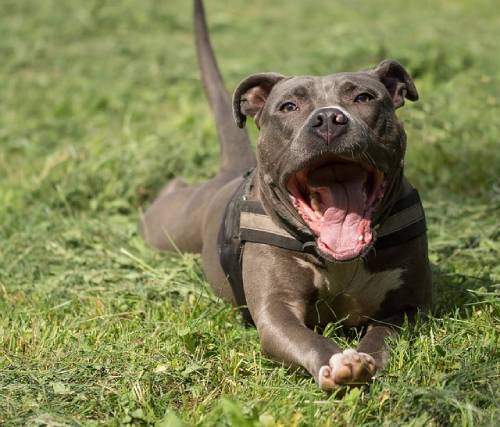 Amstaffs can reach 15 years of age on average

In terms of grooming, American Staffordshire Terrier and pitbulls are very similar. Both have short, glossy coats that require brushing a few times a week. Both need their nails trimmed, and you’ll have to stay on top of their dental health with both of the dogs.

Both American Staffordshire Terrier and Pitbulls can be characterized as healthy breeds, but, as with people, they do get certain conditions. Both breeds need vaccination at an appropriate time of their life. Vaccinations help prevent some of the most common and dangerous (sometimes even lethal) conditions such as rabies, hepatitis, canine parvovirus, canine influenza and many others. Your vet and your breeder will tell you exactly what and when to vaccinate for. You do need to stay on top of your dog’s vaccinations, as neglecting to vaccinate may lead to serious illnesses or even death.

What other conditions do American Staffordshire Terrier vs Pitbull have and what should you pay particular attention to with these two breeds?

When it comes to American Staffordshire Terrier, they often have digestive issues, allergies, eye issues, various cancers and various urogenital issues. But the most widespread conditions that affect American Staffordshire Terriers are issues related to their muscular-skeletal system. Due to their high activity levels, amstaffs often suffer from ligament injuries. If your amstaff is overweight, they have a higher chance of getting arthritis and hip dysplasia. 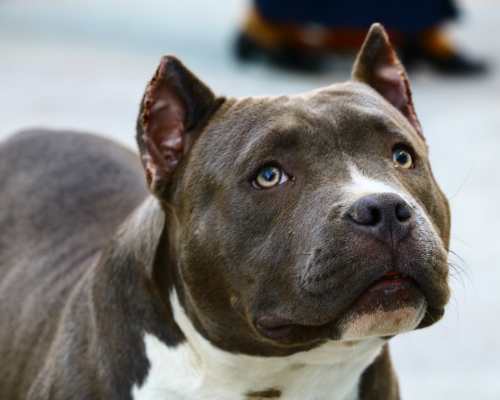 Pitbulls are considered one of the healthiest breeds out there

An amstaff that isn’t thoroughly controlled by an owner and this often gets into fights with other dogs can get may bite injuries: this is due to amstaffs being so stubborn and courageous in fights and also the fact that they have a higher pain threshold than other breeds. While any other breed (except for pitbulls) would retreat and stop a fight at the sight of first serious injury -not so with amstaff.

Like amstaffs, pitbulls are considered one of the healthiest breeds out there. However, they, too, are susceptible to several grave conditions as well as less serious diseases that all dogs can experience during their lifetime. A lot of genetic conditions pass from one generation to the next and become stronger and more common because a lot of pitbulls are inbred to preserve other (positive) qualities. An experienced breeder understands how crucial it is to prevent genetic issues from accumulating in their lines.

This is why it is critical to choose a good breeder to buy your puppy from. For that same reason, never buy a pitbull from a backyard breeder or from someone you know who just decided to get some puppies from their dog – you don’t the genetics behind these dogs and thus you can’t predict what you will get in a puppy.

One of the common and difficult diseases pitbulls have is congenital heart disease. This disease can easily be noticed even in the youngest of puppies: they become less energetic and active, get fatigued easily, and have difficult, constrained breathing. They can even faint during a particularly straining walk or a run in the park.  If you notice that in your pitbull puppy, take them to the vet immediately. An EKG will allow your vet to confirm the diagnosis and help you with managing the disease.

Some other issues common for Pitbulls is hip dysplasia, which is actually common for many breeds. Cataracts are also not uncommon with pitbulls, particularly older dogs. Heartworm is also common and is a disease that’s quite serious, although it can be managed for a number of years so that your pet’s quality of life does not decline as steeply. 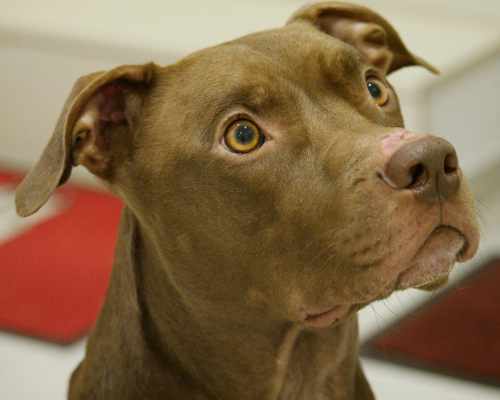 Pittie waiting for a treat

All in all, when talking about health issues in American Staffordshire Terrier vs Pitbull, it probably shouldn’t be one of your deciding factors when choosing between the breeds. Their health issues are very similar and one breed is not more susceptible to disease than another. It’s important to remember that the largest factor in your dog’s health is you! It’s up to you to provide your dog with good nutrition and enough exercise, as well as a healthy psychological environment in your house.

If you do your part, and also choose a respectable breeder to buy your puppy from, there’s a big chance your dog is going to be happy and healthy, whether it’s American Staffordshire Terrier or Pitbull.