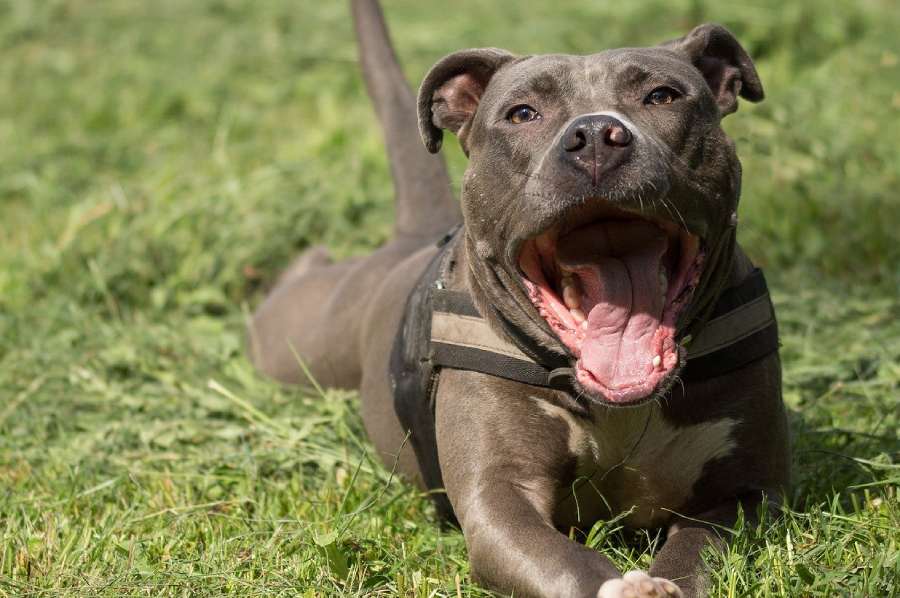 I haven’t even heard about this breed until my cousin got a Staffie puppy. Staffordshire Bull Terrier? Who’s that? 🙂 But then we visited a couple times and fell in love with the little fellow.  He was the most adorable pup I’ve ever met. Clumsy, energetic, very active and very friendly. It took us about a year of being very jealous! Then we get our own blue Staffordshire Bull Terrier, Jerry.

Jerry is 2 years old now and an absolute joy to be around. Every time any of our friends or relatives come, he greets them first and gives them lots of kisses, whether they want him to or not! He loves little kids, but sometimes he’s a bit too strong for them. Let’s just say sometimes he pushes them off their feet… to give them kisses! 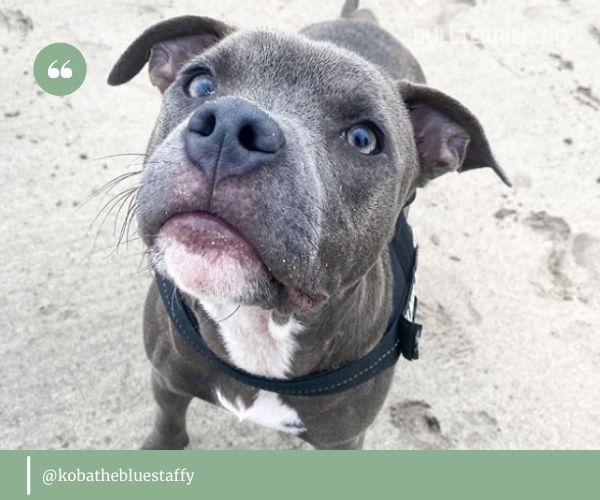 He can be a little stubborn, especially outside, on our walks. We are still working on our leash manners – he pulls quite a bit, especially when he is interested in something beyond his reach. Because he is such a powerful dog, we are trying to improve this habit.

People say Staffies can be aggressive. Not our Jerry! He hardly ever barks, really, and only growls when playing tug with other dogs or with us. He loves cats! We had to watch our friends’ cat for a week at our place, and he was just fine!

He is just the best dog all around. Highly recommended. 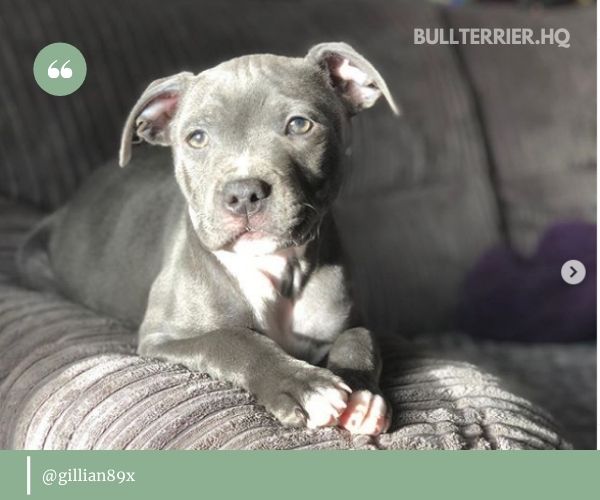 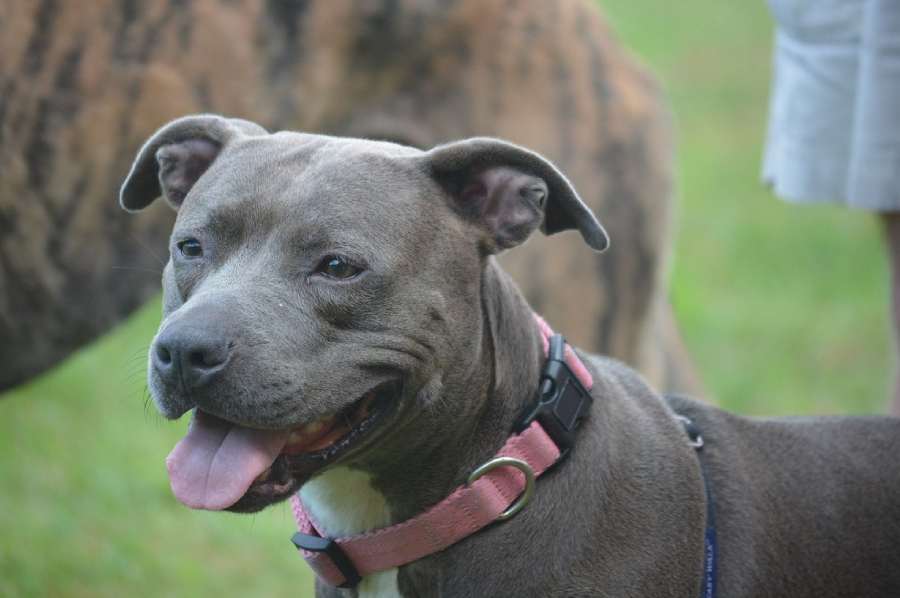 This is our Blue Staffordshire Bull Terrier named Koba. What can I say about Koba? She is the kindest, laziest, goofiest creature on Earth. We picked her up from the breeder when she was about 1 year old. This was 2 years ago. She has been a sweetheart since day one. Everyone that knows her can’t believe how “human” she is.

She really is like a little person – with a giant personality. She makes us laugh at least ten times a day! She’s also very loving. Not just to us, but anyone we meet. She has no aggression towards other dogs. When we meet another dog, especially a small one, the owner always wants to pick their pup up. But Koba just wants to give them a good lick and play! She wags her tail and gets all playful and everybody loves her. 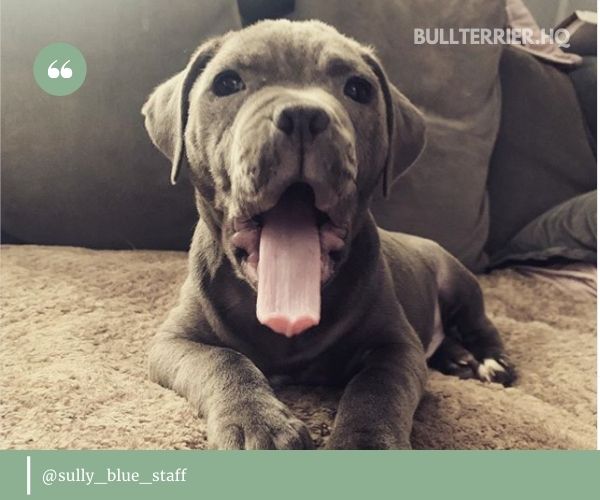 She doesn’t like it when another dog tries to attack her though. But even then she doesn’t really get aggressive. She just sort of pushes the aggressor with her body and that’s pretty much it. We’ve had to protect her against some larger dogs a couple of times!

Koba is pretty perfect for our home: she’s a very compact dog. She doesn’t shed much at all, except in the spring. We probably brush her once a week or so. She does need long walks outside and prefers parks and forest trails, but she’s also excited to go shopping with us. Basically, she’d be happy to go anywhere with us. She is very sociable and outgoing. 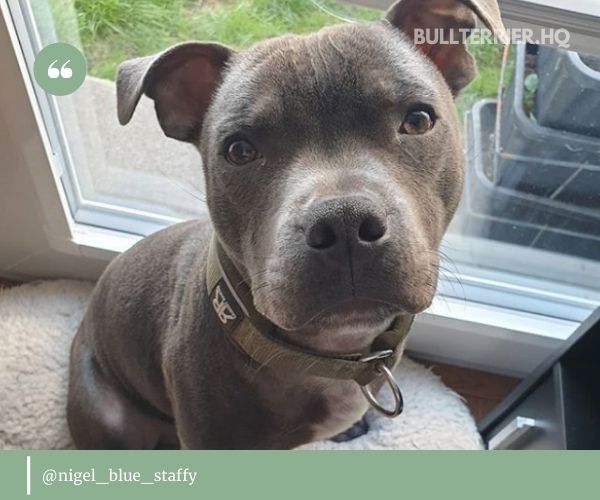 She doesn’t really bark much, but she makes a whole lot of other sounds. Those include grunting, moaning, farting, quacking and lots of others you wouldn’t expect from a dog.  We sometimes wonder if she’s actually an alien!

The pros of owning a Staffordshire Bull Terrier, in my opinion, is having such a loving, outgoing dog that’s also very intelligent and can quickly learn whatever tricks you want to teach it. On the other hand, they require lots of training and they need your attention at all times. If you don’t have time, or don’t want to work with your dog, don’t get a Staffordshire Bull Terrier. 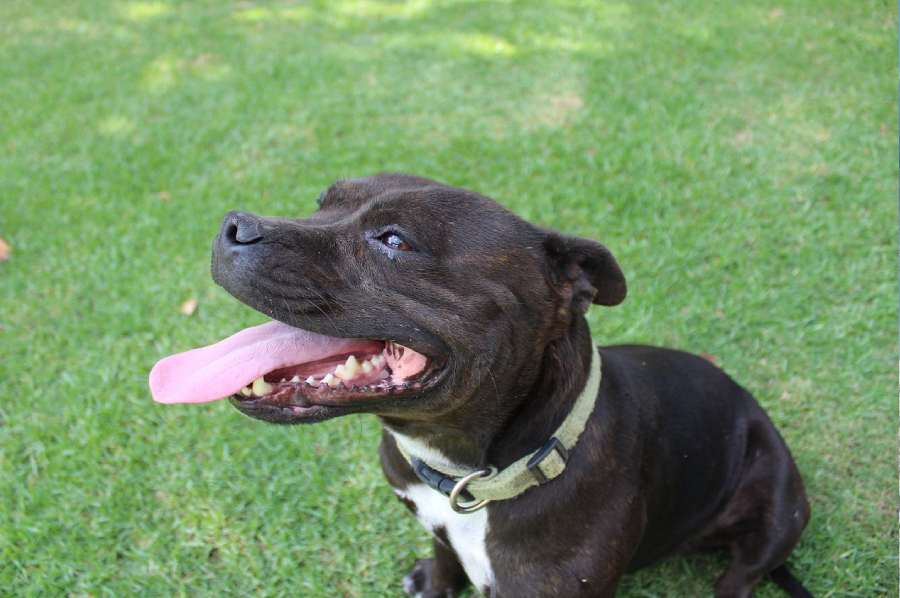 This is my Blue Staffordshire Bull Terrier Oscar. I wanted to say a few words about him because there is so much bad rep that these dogs have, especially online, and especially from people that have never met them in real life. We’ve never had any problems with Oscar in terms of aggression. Our neighbor has a Doberman, and this is the only dog our Oscar has ever been territorial towards. The Doberman used to come into our yard before we got Oscar.

But one time Oscar saw him and showed him who the boss was. It wasn’t a big fight or anything. They just sort of flew into each other – I don’t think they even bit each other once, the pure weight and force of Oscar were enough to scare the Doberman away. Now they just stare at each other sometimes, and both us and the owner keep our dogs on the leash because we don’t want any trouble. Other than that, Oscar has been really nice to other dogs, and he adores people. He can only get somewhat excited when he sees dogs similar to him – other Staffies, Pitbulls, bull terriers, similar breeds. That’s when he gets interested in some rough playing. When he has an “equal” partner. 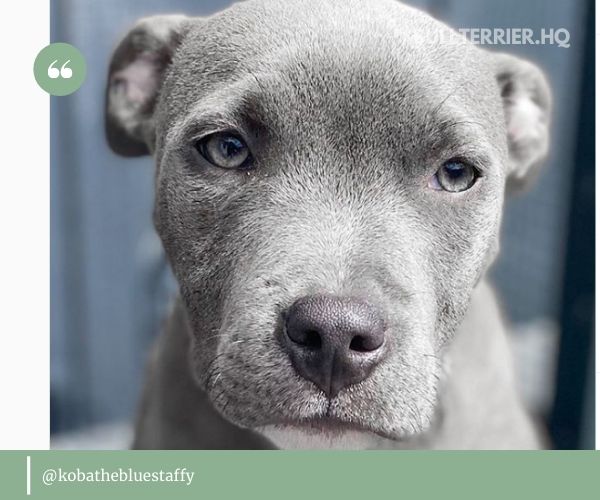 He is a great dog to have at home. Because he is so smart, he learns really fast and knows exactly what you want from him. Oscar wouldn’t do anything I told him not to, from the time he was a puppy. Well, maybe he was a bit stubborn in early puppyhood. But once he grew up a bit, he’s been pretty easy to be around. Doesn’t need he doesn’t need training. You do need to teach him things and be strict so he obeys you. If the dog doesn’t listen to you, it means they don’t respect you. They understand what you want, but just don’t want to do it. This is why training is so important – it teaches your pup that you are the leader in the family. So we spend lots of time training Oscar.

Pros of the breed are: it’s a very smart dog! And very loyal to the family. Cons: can be stubborn. Needs training.

Overall he’s been a joy to have! My family loves him. We love taking him out for walks and hikes. But he also loves lying on the sofa with me and watching Netflix. 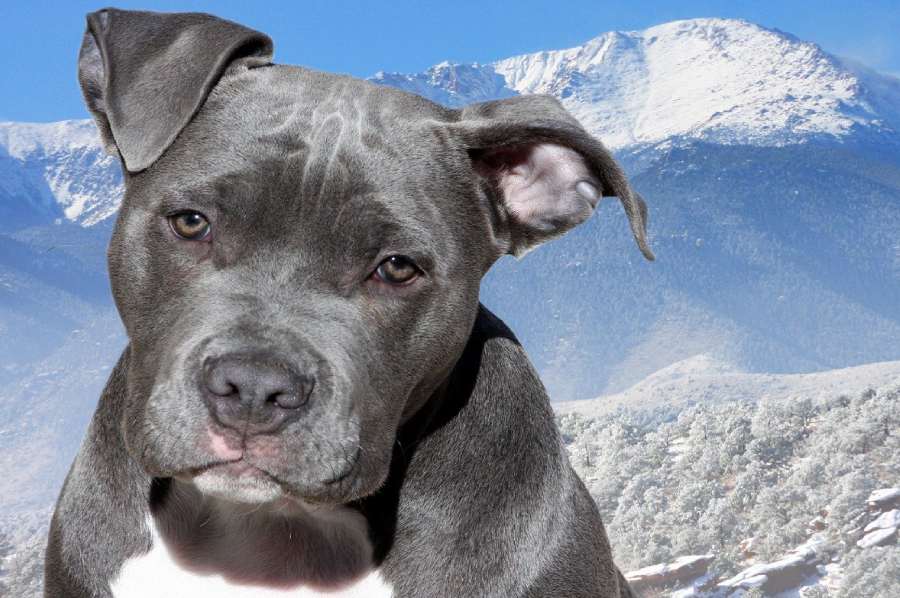 It’s hard to describe this breed briefly – maybe I am biased. This is my Blue Staffordshire Bull Terrier named Tina. Tina’s 5.5 years old and she’s been with us since she was a wee pup. How did Tina come to live with us? I’ve always loved animals, especially dogs, and always wanted one of my own. We had a few rescues before, but no purebreds. Tina is our first actual “breed” dog. I’ve always liked bigger dogs, so when a friend mentioned Staffordshire Bull Terrier, I got interested. I think we had some other breeds on our minds, but this one just stole our hearts pretty much right away. Long story short, we brought Tina home from a breeder and our story began.

Of course, when we are out walking, everyone thinks she’s a pitbull. Pitbulls just seem far more popular around here, more people know about them. So I have to tell them it’s actually a Staffordshire Bull Terrier. Some people also get afraid, and some even look at us funny. I understand. Tina can look somewhat intimidating to an untrained eye I guess.

But she has never been aggressive to people in her whole life with us. Maybe because we have a large family and she is sort of used to all kinds of people being around all the time. She can be aggressive towards dogs sometimes, so we have to walk on the leash, and also watch her when she plays in the park. But nothing bad has ever happened. We teach her to be nice and demand it from her. I wouldn’t let her offend someone else’s dog.

Tina is extremely smart. I swear she understands everything before I even say it. I think she can read faces! She is definitely in tune with our emotions and feelings and acts accordingly. She’ll cheer us up if we are sad, and if we are happy, she’ll be even happier.

Tina loves being outside, but she also loves cuddles on the couch in front of the TV. Most of all, she loves hanging underfoot when I am cooking in our kitchen. She always thinks she’ll get something yummy. We are trying to watch her weight so that actually doesn’t happen very often. But she keeps hoping.

She is a very active dog, loves being outside in any weather, although she gets a little cold in the winter, so we have a little coat for her.

As far as downsides of the breed, Tina did chew up some stuff in our house when she was a pup. My slippers, my husband’s rubber boots, a sofa, a small chair that none of us have used forever, and some electric wires! (She didn’t get hurt!)

Also, this wouldn’t be an ideal dog for a kid to take care of, even though she really loves kids. This dog is too large and powerful for a kid to take it for walks or to make sure it doesn’t hurt other dogs or people. It does need a strong owner to keep it in check. Tina can easily pull an adult person on a leash – she’s very strong.

Thanks for featuring Tina on your site!