This is a brief overview of the existing Bull Terrier colors and their combinations. Remember, color does not affect the dog’s personality or health. All colors are great and all are created equal.

All colors and color combinations in Bull Terriers are defined by just four genes. Other genes responsible for colors have been bred out of the Bull Terrier breed over the years of selection.

In the table below you can see how Bull Terrier colors mix when breeding. I found it quite interesting! 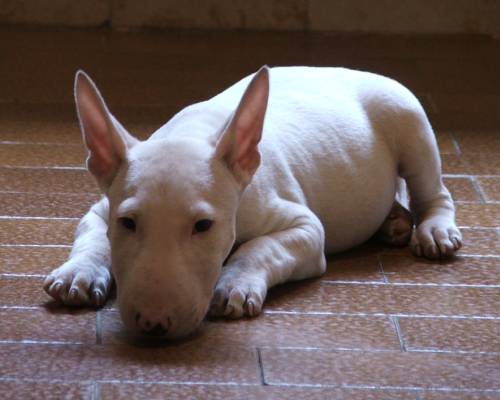 On the other note, white color is almost always present in Bull Terriers of any other colors. It can be more white or just a few spots, but it’s almost always there. If there is no white in a Bull Terrier, this is considered one of the les desirable colors when it comes to showing your Bull Terrier. Of course, for pet quality Bull Terriers it doesn’t matter whatsoever. 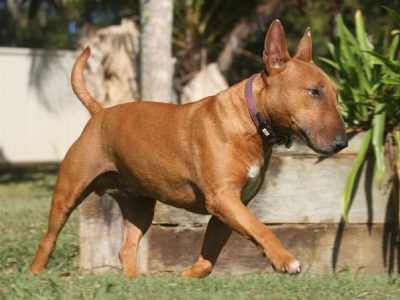 Red-colored Bull Terriers vary from tan to deep red and sometimes even almost orange. Solid red Bull Terriers are, just as the name implies, fully red, without white markings, although small white spots around the nose are allowed, as well as some spotting on the paws.

French Bull Terrier: adorable mix that will melt your heart (12 photos)
Miniature Bull Terriers for sale in the USA - breeder directory
Bull Terrier vs Pitbull - which breed is for you?
Grooming your bull terrier - don't overdo it

Red and white Bull Terriers are mostly red with larger white spots on the face, nose, neck, chest and along the belly, as well as inner sides of the legs.

Red Bull Terriers can also have black or dark markings as opposed to white. 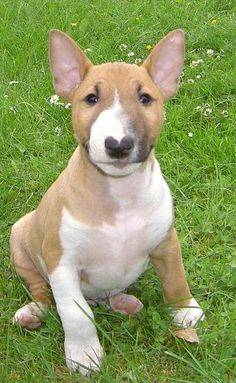 Tan is a very pale version of red color in Bull Terriers, almost close to cream color. Tan can have the same color combinations as red. Solid tan is just solid color throughout the dog’s body except for some small markings around the nose. You can find tan-and-white Bull Terriers with white markings on the head, nose, chest, neck, belly and inner legs. Tan can also have dark or black markings along the nose, chest, neck and belly. Tan Bull Terriers look very distinguished and interesting. 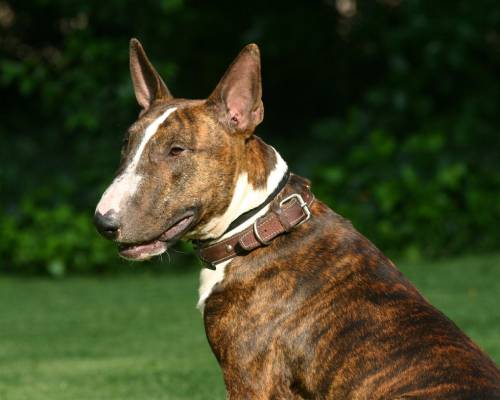 Brindle color in Bull Terriers generally means thin dark or black lines juxtaposed on the base color which can be red or tan or even yellow-brown. Brindle color pattern can come in two variations. It can be solid brindle with only a small amount of white on the nose and paws. It can also be brindle-and-white. This is a brindle Bull Terrier with larger white markings along the nose, chest, neck and belly area. 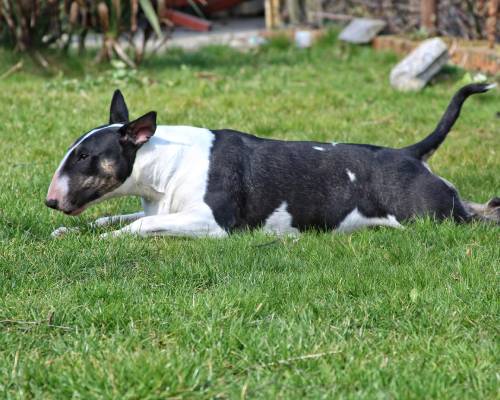 Black and Brindle Bull Terriers are black Bull Terriers with brindle markings along the lower legs, brows, and chest. If there is also a considerable amount of white, then the color will be called black-brindle-and-white.

You might have seen what you think were black bull terriers, or black and white, but pure black color actually does not exist in Bull Terriers. There is always some brindle which may be hardly visible, but it’s there. So that dog would still be Black and Brindle tricolor or Black and Brindle solid tricolor (as there is also always some white).