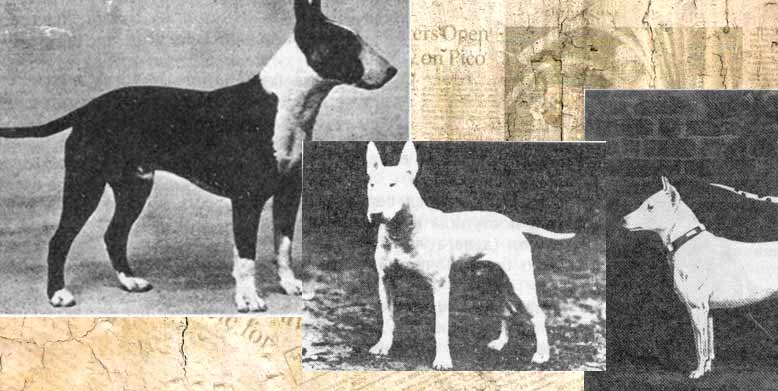 “Bull terriers have made my life so much better. They taught me so much, particularly empathy and understanding.”

Bull terrier is a beautiful, magnificent breed that has been around for a few centuries. Originally coming from England, these gentlemen of the dog world are now popular all over the world. But how did their story begin? Let’s have a look at the bull terrier origins.

Like with many other breeds of today, a bull terrier history is that of a working and fighting dog. England, the motherland of bull terrier, was also a land of such forms of ancient entertainment as bull-baiting and bear fighting, which had been popular from 1200 until the more enlightened 18th century.

For both bull-baiting and bear fighting large and strong dogs were used, lots of which unfortunately died in the fights. By 1835 these cruel sports were finally prohibited by the more humane British Parliament. However, the many remaining less humane fans of this form of entertainment switched over to dogfighting.

In the 18th century, England dog fighting was an extremely popular spectacle. What today would be considered utter cruelty, was a routine entertainment for the gentlemen in those dark times. Bulldogs, terriers and their mix “bull-and-terrier”,  were some of the most popular breeds used in dog fighting.

Bull terriers, a breed that evolved out of such crosses, was largely shaped by dogfighting. A bull terrier character is a mix of traits that were defined by its fighting past and thoroughly selected through generations to better serve that purpose.

The bull terrier began to form as a separate breed around the beginning of the 19th century in England.  At that time dog breeders were interested in creating dogs better suited to fighting and improving the existing types of fighting dogs, such as bulldogs and terriers.

It was well-known that bulldogs crossed with terriers made the best fighter dogs. The offspring of such a cross would have the strength and physical qualities of a bulldog (thick body, short legs, thick and large heads, strong and stubborn personality), and the quick movements and intelligence of a terrier.

In 1862 James Hinks from Birmingham showed a litter of white dogs at a dog show. Those were the most remarkable dogs at the show. They were gracious and elegant with straight beautiful limbs and no color spots on their white coats. That last fact hints that James Hinks, most likely, used the white English terrier to create those beautiful white dogs.

While a lot of bull-and-terrier breeders stopped breeding their dogs due to the decreasing popularity of dogfighting, James Hinks was excited about developing a new dog that wouldn’t be just a fight dog, but also a more popular dog with the larger public.

He thought that old bull-and-terriers looked too threatening with their cropped ears and rough appearance, and wanted to develop a more elegant and friendly-looking breed.

Not everybody was happy about that. Some dog lovers believed adding white terrier blood would make the new dogs less aggressive and persistent in fighting. However, that didn’t prove to be true. Hinks’ white dogs had every bit of previous “bull-and-terriers” persistence and showed excellent results in the fighting pit.

“A wonderful thing has happened. My dad, who has been selecting the best puppies from litters of old bull-and-terrier mixes, and experimented with crossing them out with white English terriers and Dalmatians, has created a litter of pure white dogs and named them “Bull terriers”.

Under that new name, these dogs climbed to the top of fame. These dogs were lighter than a bulldog, and almost lost all of bulldog features. Their heads became smoother and more elongated. Their snout became stronger without the flews (the hanging lips), their necks are longer, and their temperament is more energetic.

It is a new, more civilized-looking dog that has preserved all the best qualities of old fighting dogs: strong will, energetic temper, sharpness and intelligence, quick decision making, fearlessness, the musculature of an athlete, and the true gentleman personality.  Although bull terriers are classified as terriers, a bull terrier is a separate breed and has its own standard by which it should be judged. “

It is impossible to say with confidence, which breeds were used in the creation of those first bull terriers, although James Hinks Junior believed they were white English terriers, Dalmatians, but also, possibly, greyhound, pointer and foxhound. In those early days of the breed, the bull terriers were strictly white.

While most of the bull terriers of that time were white, by 1919 a few colored bull terriers (one of them was brindle and white Bing Boy) were shown at dog shows and even got some awards, marking a new era in bull terrier history.

For a while, the breeding of colored bull terriers was limited and regulated. For example, if a white puppy had colored ancestors in three closest generations, the seller of such puppy had to disclose that information to the buyer.

Although colored bull terriers became a common occurrence at dog shows, the white bull terrier fans were strong in their opinion that the colored dogs had inferior looks with their spotted coat and blue eyes, and some severe health issues such as deafness. American breeders were against crossing white and colored bull terriers, believing that would impact the traditional bull terrier intelligence.

However, by 1936 colored bull terriers became part of dog shows in the same class as white bull terriers. They still weren’t accepted as equals and were commonly disqualified for spots on their coats and other faults. White bull terriers that had colored parents were also often boycotted at the shows.

In 1937 a special book of records was introduced to preserve the white bull terrier intact. The dogs marked in the book were purely white in all generations beginning with the first litter created by James Hinks in 1862.

In 1939, the Canadian Kennel Club accepted colored bull terriers as a separate breed. However, only a few years later, following England’s example, they changed their mind and began looking at all bull terriers as one breed regardless of color.

In 1950 the war between white and colored bull terriers was finally coming to an end. By then some of the colored bull terriers were technically superior to the white ones due to the wider pool of genes available (the white ones were limited to only breeding within purely white dogs for years while colored ones had no imitations and could select better dogs regardless of color).

By the 20th century, bull terriers have spread all around the world and found loving fans in almost every country. Despite recent wrongful allegations of aggressiveness and “bloodthirstiness” of bull terriers as a breed, which led to a drop in their popularity among the uneducated public, bull terriers continue being wonderful, loving pets for many households.

Bull terrier owner review: Katy and Jake
Miniature Bull Terriers for sale in the USA - breeder directory
Bull terrier rescue and how to go about bull terrier adoption
Bull terrier puppy vs adult dog - what should you choose?