What is your bull terrier’s name?

What made you decide to get a bull terrier?

My partner and I just bought a new home. Since we don’t have kids yet, we decided we could start practicing “parenting” with a dog 🙂 We were choosing between quite a few breeds.  My partner wanted a rottweiler, and I wanted something smaller, like a dachshund. Honestly, I’d probably be happy with a dachshund. Or a boxer? We were a bit all over the place.

Then my partner said, if we want something … not as big… why don’t we look at bull terriers? Long story short, we were going to a breeder’s to look at some bull terrier puppies! I actually haven’t seen a bull terrier (puppy or adult) ever before and was quite worried that I wouldn’t like one.

The first bull terrier I saw was an adult one. It was quite large and looked somewhat unfriendly. I was a little taken aback and thought that maybe it was a bad idea and we had to turn around before it was too late. But the breeder brought us two puppies! And that’s when our lives changed 🙂

The pups were adorable. They looked different than any other puppy I’ve ever seen, that’s for sure. But they were very cute! You know how special bull terriers are, and they are just that much more special when they are tiny!

We picked one of the pups. He was the one that was actually pretty bitey, but that didn’t scare us. My partner even made sure again to see if I didn’t change my mind, and it surprised me how much I wanted the little guy to come home with us.

How was the pup’s adaptation to the new home?

It was actually a bit rough. I mean, now that we think back to it, it’s totally fine, because Jake is a member of our family and we wouldn’t have it any other way! But back then w had a few tough moments. For one, Jake’s love fo biting didn’t really go away right away. He kept biting us, especially me. I had teeth marks and scratched all over my arms up to my elbows those days! We tried to teach him not to do that, but it took a while before we managed to convince him to stop.

He also cried a lot at night for the first few weeks that we had him. We didn’t make the mistake of letting him sleep in our bed, but we also didn’t know about crating and just left him outside our bedroom. Those weren’t great nights, to say the least.

A few weeks after we got Jake, we bought a large crate and started crating him for the night. We had to get up in the middle of the night to let him out, but other than that the night crying stopped, which was a welcome relief!

Other than that our adaptation went pretty well! Only a few chair legs somewhat chewed up and one pillow very chewed up! But we love him anyway 🙂 And he DOES NOT chew anything anymore, except for his toys! 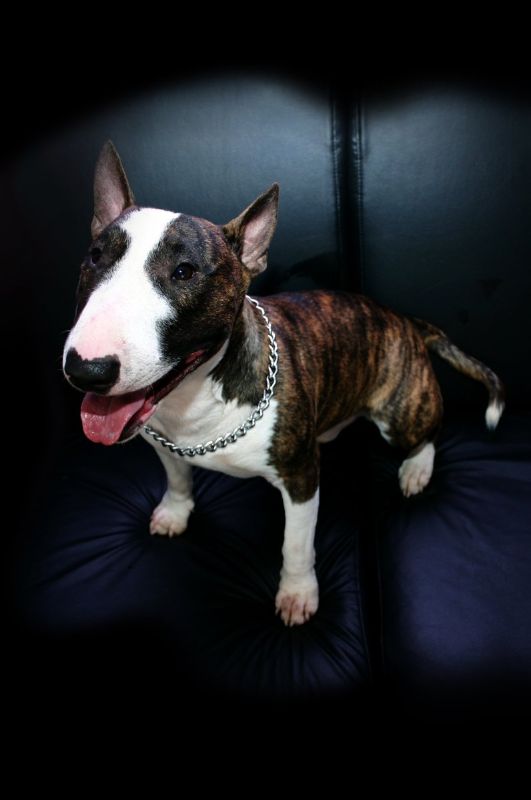 What do you feed your bull terrier?

We only give him premium dog food. We actually looked into making his food ourselves, and even raw feeding. But he turned out to be allergic to so many foods! We hear that many white bull terriers are.  It took us a bit of time to figure out the perfect brand and perfect food for him, but now we are pretty happy with it, and so is he! We normally feed him a large meal once a day and then a small snack in the evening.

He doesn’t show any aggression towards anyone. Even when other dogs are aggressive towards him, he kind of just retreats and look at them like they are crazy. And then looks at us, as if he doesn’t know how to deal with it.

He is also incredibly loyal and loving. He loves spending time on the couch with us but also likes hanging out outside. Anything, as long as he is with us.

He is very funny too. Honestly, we have never laughed as much as we have since we adopted this little goof. I think if he was a person, he would have been a clown! He is also like a kid with four paws!

Would you recommend adopting a bull terrier to other people?

Absolutely, I would recommend others to consider a bull terrier for their next dog. But I would also like to say that bull terriers can be pretty stubborn. They deserve owners that would invest some time into working with their dog to overcome issues if they do arise, and no give up on a dog. I just hate thinking of bull terriers left in shelters because someone is too lazy to work with the pup to correct a potential “stubborn” behavior.

Also, bull terriers do need a lot of physical activity. So if you are a couch potato, maybe you wouldn’t be the best owner for a bully.

One other thing about owning a bull terrier is that you have to sort of have a thick skin! We get so many “looks” from people when we walk our Jake. People even cross to the other side of the street sometimes. Like, most people are OK, and even curious about Jake, but a few can really get on your nerves.

It’s just the bull terrier reputation that seems to still be quite pervasive! We try and educate people, and show our friends how sweet Jake is. But it’s a slow process in society as a whole for people to start trusting bull terriers.

Other than that, yes, wholeheartedly yes, do adopt a bull terrier. Especially if you are not the first time dog owner. And if you feel that you will fall in love with this unusual, unique breed. Go for it.