Bull terrier pitbull mix – are they something to consider?

People that don’t know bully breeds very well often take pitbulls for bull terriers and vice-versa. People that do know the breeds know that they are quite different, and often prefer one to the other. But what about owning a bull terrier pitbull mix?

Mixes are often said to combine the best traits of both parent breeds plus hybrid vigor: a stronger immunity against illnesses that the parents are prone to. Is it really true? And what about a bull terrier pitbull mix personality?

If you are curious about a bull terrier pitbull mix, here are a few things you need to know about them. 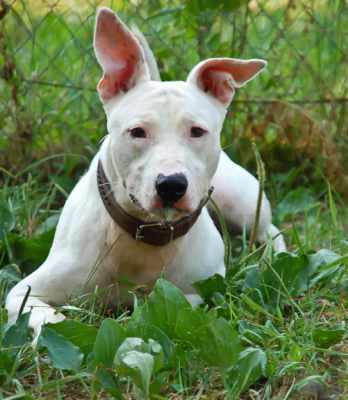 In Germany, where both of these breeds were forbidden in certain parts of the country, people resorted to crossing pitbulls with bull terriers to produce a dog with similar qualities without breaking the law. By the way, the German bull terrier pitbull mixes are called Titan Terriers, and they reached a certain level of popularity among the German lovers of bully breeds.

A person not deeply familiar with the two breeds may think that the mix of these two “ferocious” breeds would produce a terrible combination of aggression, power and unpredictability. And they couldn’t be more wrong.

Bull terriers and pitbulls aren’t that different from each other in terms of personality and breed history. Both are technically terriers (the word pit in pitbull refers to the fighting pit in which these dogs were most often used, while bull terriers were used to fight rats more often than other dogs). The other difference is that pitbulls have been long selected and bred for their working qualities (fighting in the pit), and bull terriers predominantly for their exterior, conquering the world as show dogs and urban companions. 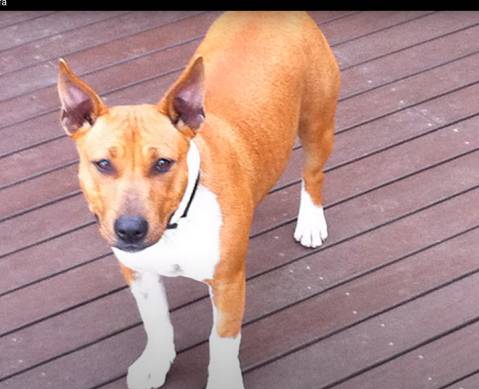 Bull terriers and pitbulls aren’t that different from each other in terms of personality and breed history. They make a great mix!

In terms of strength and power, pitbulls are more powerful and have higher endurance than bull terriers. They have larger bodies, slightly different Musculoskeletal system and they are generally heavier. Although truth be told, both dogs are very “high endurance” dogs compared with most other breeds. Bull terriers have dalmatians and old English terriers in their bloodlines.

Pitbulls also have old English terriers in their blood, but also several other terriers. They are, in general, larger than a bull terrier, with more balky and powerful body and “squarer” head than that of a bull terrier.

A bullterrier pitbull mix often ends up looking more like a pitbull – with a squarer head , shorter nose, stalkier legs and generally wider and balkier physique. The ears may end up looking like a bull terrier’s – perked up as opposed to loose, pitbull style ears. In terms of color, as with any other mix, you can never predict what color the puppies will be. Bull terriers, just as pitbulls, come in a variety of colors. The resulting puppies could be white, brindle, red, black, blue and any combinations of the above.

All in all, a bullterrier pitbull mix is a strong, powerful dog of medium size, powerful body, with strong jaw, perked up or loose ears and of any of the colors that either pitbull or a bull terrier can come in.

Mini Bull Terriers are also sometimes crossed with Pitbulls to produce a mix. 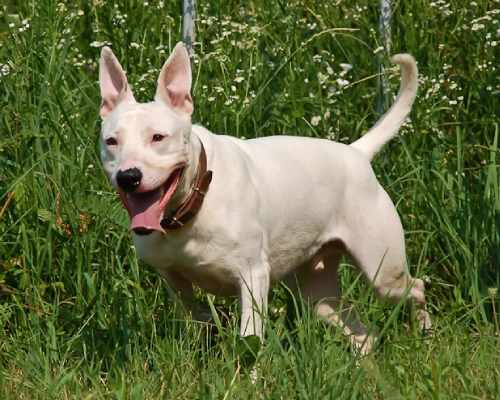 Bull terrier temperament is one of the best things about this breed. Despite their bad reputation, bull terriers are friendly, loving, and happy dogs with low levels of aggression towards humans. In fact, they were bred to be non-aggressive towards people (as you can read more in this article about Bull terrier history). A person was always supposed to be able to safely break two fighting bull terriers apart in the pit, and if a bull terrier was dangerous towards a human, it was immediately destroyed.

This is why bull terriers, despite their great physical strength and their fighting pit past, are one of the safest dogs for humans provided they are raised well. They are nonaggressive, patient, tolerant to pain and other stimuli, and very funny. They are also very loving and loyal towards their families and their owners. People have enjoyed them for centuries as urban companions, just like they do today.

They do need a strong hand to help them blossom into the best dog they can be. It is the owner that plays the defining role in what kind of a dog a young pitbull will grow into. Proper socialization, training, active life style and a highly involved owner (or a whole family) is necessary for a pitbull to be a happy and safe dog – safe for the owners, for other humans and dogs alike. 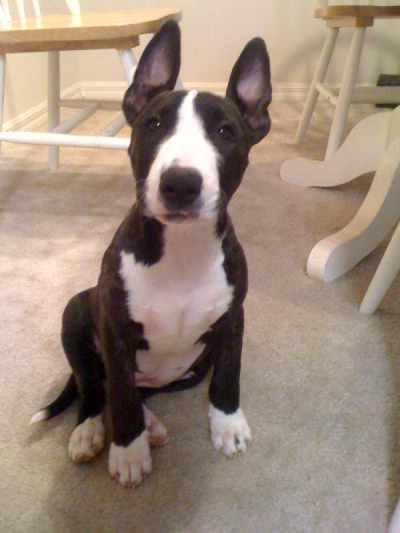 Temperament-wise, with parents like bull terrier and pitbull, the bull terrier pitbull mix is bound to be strong-willed, stubborn, self-directed and energetic dog. Like with the parent breeds, a dog like that will need a strong owner to direct and control them.  It largely depends on the owner whether the dog will grow up to be a pleasure to be around, or a four-legged tyrant. With a powerful dog like a bull terrier pitbull mix, a future owner needs to make sure they have what it takes to raise such a unique dog.

This means having plenty of time (and desire) to train and socialize the puppy, to be around them when they need to learn basic things about the world and to teach them to approach the world with friendliness. A bull terrier pitbull mix may be aggressive towards other dogs because this is something genetically common for both bull terriers and pitbulls.

It is your role as an owner to teach your bull terrier pitbull mix, from early puppyhood, that other dogs are friends and not enemies.

A bull terrier pitbull mix is not going to be a good guard dog for that very reason. First, they are not genetically aggressive to people, and thus not a good “natural” choice for guarding work unless you break their natural disposition. Second, this is a very powerful dog.  If you intentionally raise them to be aggressive towards people, ou will get a serious weapon in your hands, which may one day backfire and become a danger not only to strangers, but to your own family members.

This is also not a great outdoor dog. If you are planning to keep your dog outside on a chain – pick a different breed (or best of all, please don’t get a dog at all!).  A bull terrier pitbull mix will be best off living in the house with you, as your daily companion. If they are kept outside, they will get lonely, bored, frustrated and potentially aggressive. 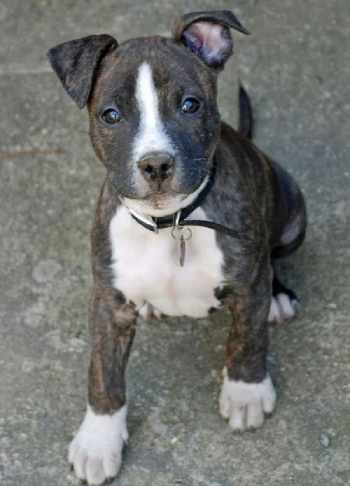 As with any breed, a Bull terrier pitbull mix is prone to inherit the health status of both of its parents: a bull terrier and a pitbull. Many people talk about hybrid vigor being one o the factors pro crossing the breeds. However, that is not always the case. Often, just on the opposite, the resulting puppies get a combination of issues common for the parents.

Genetic testing of the parents always has to be done before breeding to ensure minimum chances of anything genetic cropping up. This is another reason to only purchase your puppy from a very good breeder, unless you are not afraid of a very expensive and heartbreaking problem further down the line.

What possible health issues can you expect with a Bull terrier pitbull mix? To answer that, we need to look at what diseases are common for the parent breeds.

One of the common health issues in bull terriers is various heart and vascular disease, although they affect miniature bull terriers more so than standard size bull terriers. Some dogs have heart defects throughout their whole life without too many grave symptoms. Others may develop severe complications, especially as they age.

Hyp displasia is quite common in bull terriers, although not much more common than in some other breeds. 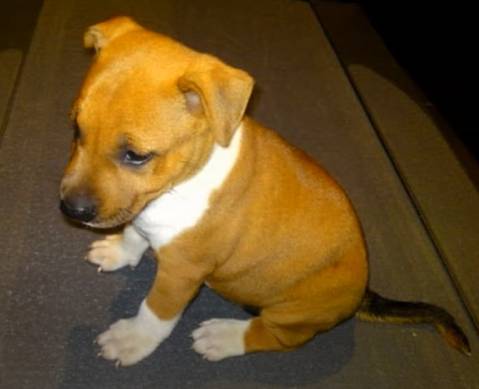 Kidney disease is a very widespread problem for bull terriers. It can develop at any age, although it often depends on quality of nutrition that the dog is getting, and can be managed with proper nutrition as well, at least on early stages. At later stages a bull terrier with kidney disease needs to be managed medically.

One of the diseases that is fairly rare but very grave that happens in bull terriers is lethal acrodermatitis. It’s a rare congenital disease that results from inability to metabolize zinc and leads the dog’s skin to develop lesions and become hard, as well as causes developmental delays and a host of other issues in the dog.

When it comes to pitbulls, they are prone to congenital heart disease – a inborn disease that gradually reduces the dog’s heart function and leads to difficulties breathing. As with bull terriers, hip dysplasia is common in pitbulls as well. Cataracts often occur in pitbulls, especially as they age.

Heartworm can be common for both pitbulls and bull terriers.

Overall, when it comes to Bull terrier pitbull mix, it has all chances to be a fairly healthy dog if the parents have been genetically tested and any genetic and other health conditions have been ruled out.

Should you be breeding bull terrier pitbull mixes??

A lot of people who own and love their dogs often think about breeding them to get puppies. Some even think of cross breeding them with another breed to get something “interesting” as a result. Both are really bad ideas. Don’t get involved in “back yard breeding” and especially never attempt to do the “mixing” of two different breeds. Especially when it comes to bully breeds!

If you have to have a bull terrier pitbull mix, check out your local shelters, or search online – it is very likely that you will find one. Otherwise, leave the job of breeding for the breeders that know what they are doing. It isn’t about getting a mix of your two favorite breeds.

It is about breeding two healthy, well-bred dogs together to get healthy, well-temperamented offspring that will be free of disease and character defects. Unless you have been into breeding and took time to learn to do it properly, it is best not to risk making mistakes when it comes to an animal’s life and well being. As well as life and well being of the people that will own those dogs.