In this article, I wanted to talk about Bull terrier pros and cons. What are some good and bad sides about owning a Bull Terrier?

While bull terriers are an excellent breed to have, they are definitely very special and not like other breeds! Bull terriers generally have great temperament. Of course, we, bull terrier lovers, know what is what and that there are only pros to having a bull terrier! 😉

But for those just considering owning this breed, things may not be this clear. If you are still pondering whether a bull terrier is for you or not, I hope you find this article very useful. 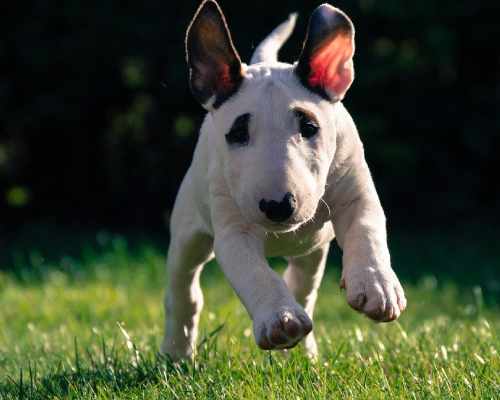 So what are the pros and cons of getting a bull terrier or a Mini Bull Terrier?

Bull terrier pros and cons: what are some great things about owning a Bull terrier

If you’ve always wanted a dedicated friend that is always going to be by your side, guard you, love you, keep you safe during particularly stormy nights (but not during fireworks, now you are asking for impossible things!), add to your style with their smooth looks, and make you laugh at least 20 (or 200) times a day – you are in luck.

A bull terrier is all that and more! They are generally great companions for almost anyone – from a single person to a family with (not too young) kids. 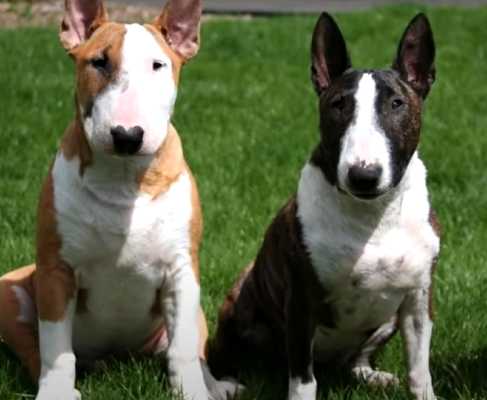 The general opinion about bull terriers is that they are bloodthirsty killers just waiting to attack. The truth is, they really are just waiting – to lick your face.

They are generally not aggressive by nature. In fact, it’s quite the opposite. As former fighting dogs, bull terriers were purposefully bred to not be aggressive to people, only to dogs in the fighting pit.

Patience and nonaggression are two of the main traits of the bull terrier character. Bull terriers can be truly fierce – in their love towards their people!

Bull terriers are a very easy breed when it comes to grooming. In fact, there is hardly any grooming. Bull terriers do need an occasional nail trimming, and you have to be on top of their mouth and teeth health.

You might also want to give them a bath from time to time. If you absolutely cannot stand any hair in your house, you will also need to brush your bull terrier fairly often – although their hair is short, they do still shed just like any other dog.

But if you don’t mind some hair here and there – you will be just fine with minimal time investment into your bull terrier’s grooming. 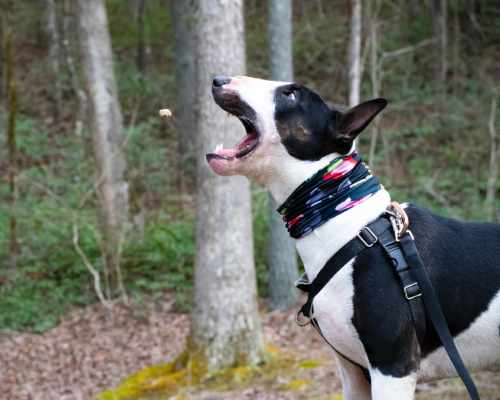 Bullies are very smart and trainable

Bull terriers are a bit unique among other dogs in that they actually don’t have that doggy smell. Is that because they are perfect dogs? Well, yes. But also because bull terriers have really short hair that virtually doesn’t smell. That’s a good perk for dog lovers who don’t love the doggy smell.

If you dream of a dog that will be able to understand a few dozen commands, bull terrier could be just what you need.  Bull terriers are highly intelligent and very trainable, although that doesn’t mean they are very easy to train.

Although bull terriers (and Miniature Bull Terriers) are very smart and will definitely know what you want from them when you tell them to “sit” or “shake”, they can be very stubborn dogs. A bull terrier will obey your commands only if they respect you as an owner and trust that you are the “alpha” dog in their pack.

This really goes beyond training your bull terrier, but more of being a good, confident owner. If you can be such an owner for your bull terrier, you will not only easily teach them as many commands as you wish, but will also be able to demonstrate the results of this training at any moment.

Bull terrier pros and cons: what are some downsides to owning a Bull terrier? 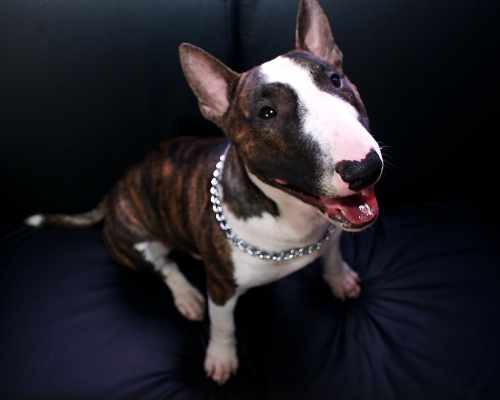 There are some downsides to having a bull terrier

Are there any? A bull terrier aficionado will try to convince you there is no such thing. However, in truth, while bull terriers are perfect, some people would make better owners for a bull terrier than some other people, due to certain things that are common for most bull terriers.

Bull terrier cons: they are head-strong

You could also call them stubborn, motivated, or willful. Compared to some other breeds, bull terriers really are not the easiest dogs in terms of owner leadership.

You have to be a strong leader, and be seen as such by your bull terrier, for them to obey your commands, or even just accept your rules in the house. Training could help, but most of all, you need to understand dog psychology, and particularly bull terrier psychology, to be able to be a leader of the pack in your house.

If you have never owned dogs before, or feel intimidated by stubborn dogs, a bull terrier might not be the best dog for you. 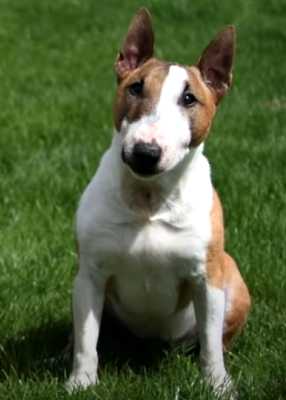 If you have never owned dogs before, a bull terrier might not be the best dog for you.

Bull terriers are awesome, but their reputation has not always been great. Unfortunately, some people still don’t know much about them and think that bull terriers (along with pit bulls) are monsters who need to be avoided.

You will be met with hostile looks. People will try to avoid you and pick up their own dogs (especially smaller dogs) when they meet you and your bull terrier out on a walk.

They will whisper behind your back. Some of your neighbors might be worried about a “monster” dog living nearby. Before getting a bull terrier, you need to make sure you are going to be OK with people not understanding this breed, and all the consequences of it.

Bull terriers are very strong dogs, and as such, they need lots of exercise to maintain their muscle tone, their health, and (not least important) their mental health. 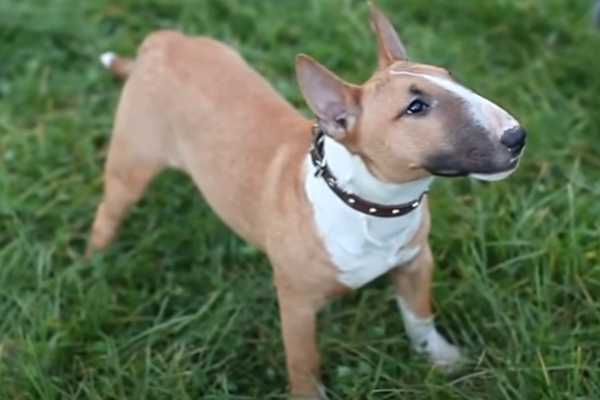 A bored, unexercised bull terrier is a destructive bull terrier. Your bully will need daily exercise, which could be walking, hiking with you or running in the dog park.

As long as they don’t spend the whole day laying on your couch. For the same reason, it is really better for a bull terrier to live in a larger house rather than in an apartment. So if you live in a condo or apartment situation, a bull terrier might not be perfect for you.

Winters can be tough

Bull terriers are generally active and happy dogs all year round. But if you live somewhere in the North, winter might not be the best time for your pup.

Bull terriers have short sleek fur that really doesn’t keep them warm in cold weather. So if you are based in Alaska and are planning to take your bull terrier on long hikes in the woods, you might need to think of getting your pup a sweater. 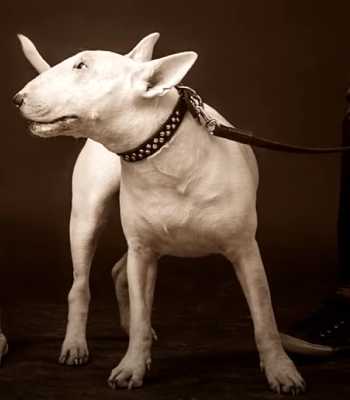 There is always a financial side to everything, and getting a dog is also a financial decision. A well bred bull terrier will cost you anywhere from $1600 to $1700.

If somebody is offering you a puppy for less than that (depending on what country you live in), you might want to be careful. A well-bred bull terrier can’t and won’t cost less than that as good breeding is expensive.

Apart from the price you’ll have to pay for your new puppy, you would also need to have enough to buy food, toys and other supplies.

You will also need to budget for vet bills, even though bull terriers are normally pretty healthy.

Although bull terriers are a generally healthy breed, they do tend to be allergic to lots of foods, especially white bull terriers.

If your bull terrier is allergic, you will need to do some investigative work to find out which foods cause your pup allergies and will have to work on replacing those foods.

Bull terrier cons: you will spend lots on toys 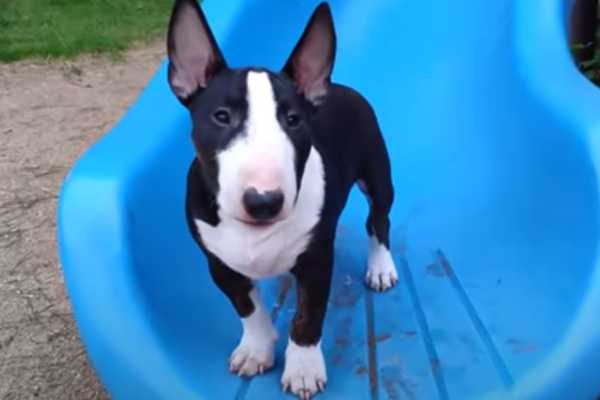 Bull terriers are pretty stubborn, and also have strong jaws

One of the cons of owning a bull terrier is that you are going to have to buy a lot of toys for them! Bull terriers are pretty stubborn, and also have strong jaws.

Because of this, most of the toys you but for your bull terrier will very quickly end up being chewed up and destroyed.

If you don’t want the same to happen to your kitchen chair or your doors, or other wooden objects in your house, you better replace those toys fast! So you’ll have to budget for lots of toys for your pup, even after they grew into an adult dog.

This one is the key con for bull terriers, as well as any other dog. An owner that doesn’t understand their dog’s psychology and isn’t willing to learn and invest time in training their dog and exercising it, is really the worst issue when it comes to any dog and especially bull terrier.

Bull terriers need a strong, confident, attentive and dedicated owner. If you don’t have time or desire to devote a lot of time to your bull terrier, you will find this breed difficult to own and will find lots of negative sides to having a bull terrier.

If you do understand that having a dog and particularly a bull terrier is something that will require your time and attention, and are willing to invest that time and effort into raising your bull terrier properly, it will be the best dog you have ever owned! No matter how many Bull terrier pros and cons there are.