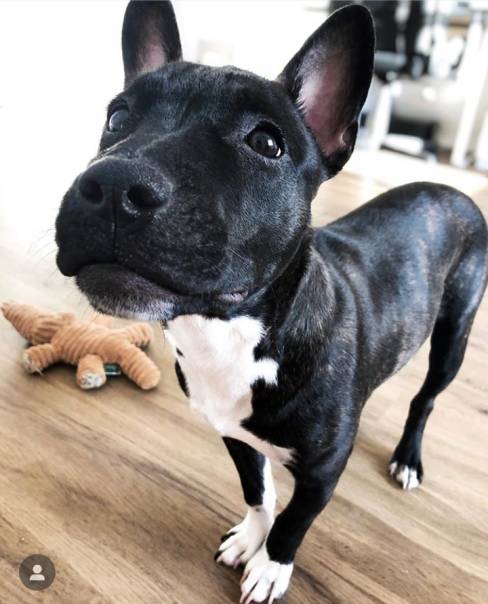 French Bull Terrier is another mixed breed that resulted from crossing miniature bul terrier – this time with French Bulldog. Miniature Bull Terrier is quite a bit smaller than a regular bull terrier: they only reach between 10 to 14 inches tall and can weigh 24 to 34lb. They are an attractive dog for those that love bull terriers but perhaps would like to own a more compact dog.

French Bulldog is also a very compact dog reaching about 12in tall and weighing up to 28 pounds. A mix of the two has resulted in a small but sturdy, strong dog with a lively personality and unique appearance.

In terms of history, it’s important to know that both of the French Bull Terrier “parents” (Mini Bull Terrier and French Bulldog) come from two long lines of fighting dogs. French bulldogs come from English and Spanish bulldogs, both of which have been traditionally used in dogfighting and ratting. 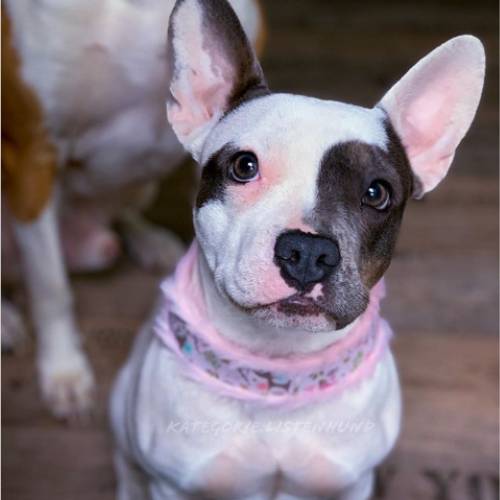 French bulldogs have inherited a lot of the English bulldog’s sturdy, muscular but compact stature. They originated in France around the 19th century, when English and Spanish immigrants were migrating to France in large numbers and brought their dogs with them.

In France, the newly brought bulldogs were crossed with toy-bulldogs, pugs and likely some other breeds. By the end of the 20th century, French Bull Terriers have formed their iconic look with flat, square faces and overall rounded shape of their head and body. Although the “French uglies” weren’t immediately accepted in other countries as a separate breed and weren’t necessarily liked right away, they slowly made their way into the hearts of most Europeans.

Today, they are wildly popular all over the world.

Bull Terrier history is somewhat similar in that they also took their roots in fighting pits and slowly evolved to a true urban companion with thousands of devoted fans all over the world. Miniature Bull Terrier is special in the sense that, unlike their bigger counterparts, mini bull terriers weren’t bred as a separate breed until dogfighting was more or less banned in Europe.

Before that, most breeders were only interested in larger bull terriers, while smaller dogs were considered useless in the fighting pits. After the pits were banned, many more people became interested in owning a smaller, more compact bull terrier, which resulted in Miniature Bull Terrier becoming a popular breed. 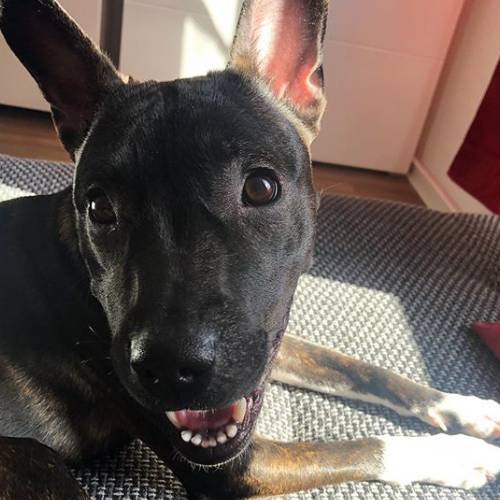 French Bull Terrier appearance, they tend to be a nice combination of both of their parent breeds
Image Source: Instagram

Although people have been mixing breeds ever since the first breeds appeared, it’s only recently that someone started crossing Mini Bull Terriers with French Bulldogs to create a new crossbreed of French Bull Terriers, that is becoming a new source of joy for the bully breeds lovers all over the world. 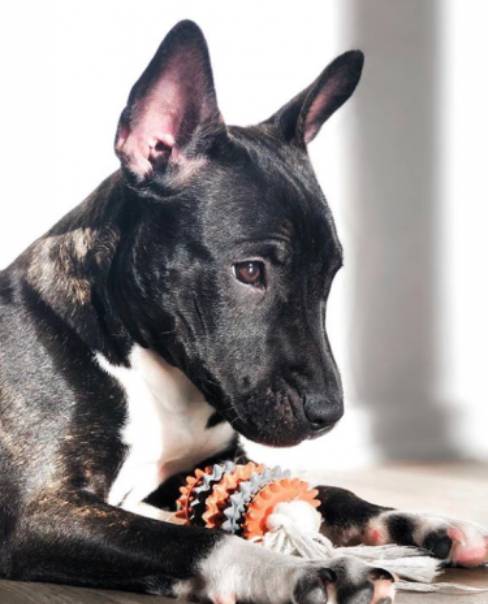 French Bull Terrier with a toy

When it comes to French Bull Terrier appearance, they tend to be a nice combination of both of their parent breeds. Since both Miniature Bull Terrier and French Bulldogs are almost the same size, the resulting mix, unlike some other mixed breeds, looks very well proportioned and “organic”.

They have a compact, solid, sturdy and muscular body with a strong, well-developed musculature, particularly in the chest area. They also have shorter, sturdy limbs. Just like in Bull Terriers and Bulldogs, French Bull Terrier’s coats are sleek, shiny and short.

The eyes are much rounder than a bull terrier’s, taking more from the Bulldog’s parent, although there is something in their shape that does remind you of the Bull Terrier’s eyes. The ears tend to stand up and are quite large, which makes the French Bull Terrier look particularly cute. The tail is not very long and stays down.

Size-wise, French Bull Terrier can reach up to 15in tall (for males) and way up to 30-34lbs. It’s a perfect dog for a smaller house or even an apartment. It’s also a good-sized dog if you are a first-time dog owner and don’t have experience handling a larger dog. 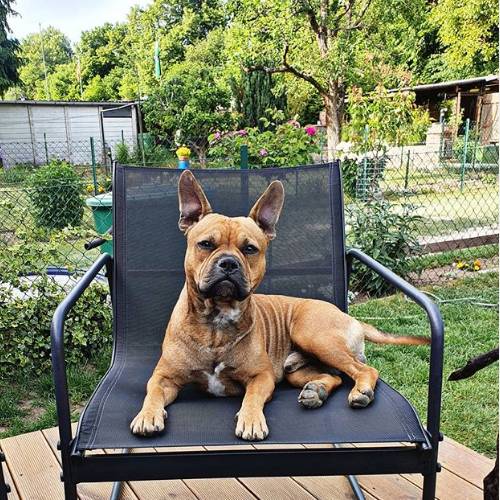 French Bull terrier may inherit any color or color combinations from their parents
Image source: Instagram

As a mixed breed, French Bull terrier may inherit any color or color combinations from their parents. French Bulldogs come in a variety of colors such as brindle, fawn, black, pied and blue (although blue is not a correct color for a French Bulldog according to the AKC standard.)

Bull Terriers can also come in a variety of colors such as white, tri-color, brindle, fawn and red. A French Bull Terrier may inherit any of these colors or their combinations. The most adorable French Bull Terriers I have personally seen were black and white, but any color would look great on this little cutie!

French Bull Terrier is a great dog for a family or a single individual. They combine some great character traits from their Bull terrier and French Bulldog parents. 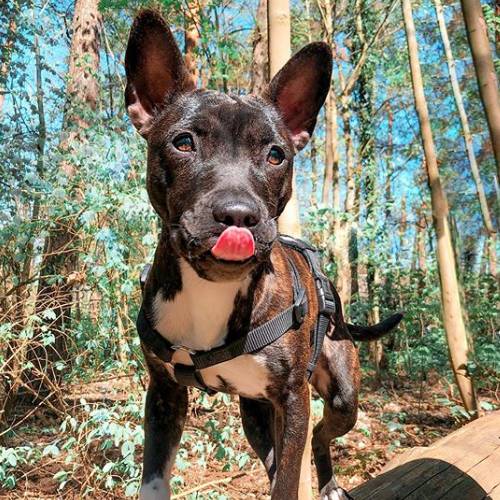 If you’ve ever owned a French Bulldog, you know how friendly and sociable that little dog is. The same can be said about Miniature Bull Terriers, who are one of the most sociable breeds out there despite the bull terrier reputation of being aggressive and unapproachable. French Bull Terriers have inherited that friendliness and amiability. They are all about being with their families and playing, playing, playing.

They are always happy when you have guests in the house, but even if it’s just you, your little Frenchie will be by your side at all times. French Bull Terriers make for devoted companions and would be great for a single person in need of company. They also love children and are a great dog for a family even with small kids.

French Bull terriers rarely display much aggression: although temperaments vary from dog to dog, in general, they are a very low aggression breed. You won’t have to worry about your Frenchie attacking other dogs or people, although, of course, they will need training like any other dog.

Some French Bull Terriers hardly ever bark at all. This is another reason why they make a great apartment dog. Or a great dog for anyone that appreciates their peace and quiet. 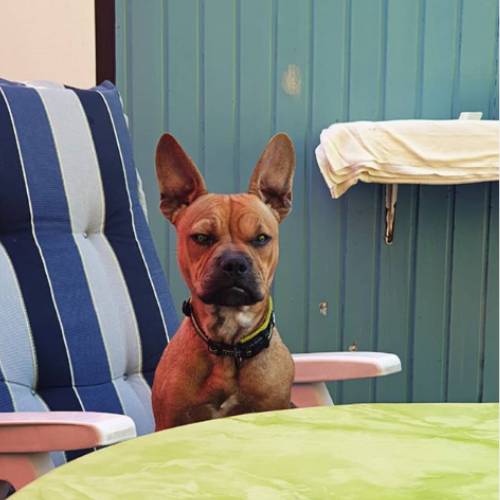 Some French Bull Terriers hardly ever bark at all
Image source: Instagram

Bull terriers are extremely intelligent if a little stubborn. French bull terrier is also a very intelligent breed. They are eager to learn: it’s stimulating and they love stimulation. They also enjoy following your commands and doing the tricks they have learned, especially if they know they will get rewarded. (Although try not to overdo it on the treats. French Bull terriers can easily gain extra weight, which isn’t healthy.) Sometimes they may be a bit stubborn if they aren’t very excited about the trick you are asking them to do. (Especially if your pup is not that food motivated).

Stubbornness can be very common for both Bull Terriers and French Bulldogs, and French Bull Terrier may very well inherit it from both parents. So if you expect your dog to thoughtlessly follow anything you tell them to do, you may be better off with a working breed like German Shepherds. French Bull Terriers can definitely be strong-willed and somewhat self-directed. These tendencies, however, can and should be corrected via training.

French Bull Terriers have a short, sleek coat, which isn’t the best if you live in frigid conditions or even in an area that just has a long cold or wet winter. So if you are planning on winter hiking and trekking with your dog, you better get them some clothes! Or choose a breed with a longer, thicker coat.

French Bull Terriers, like any smaller dog breed, are quite active. While they are not hyperactive in any way (not nervous and fidgety or barky!), they are very curious and need to be exploring or playing a lot of the time. These little energy balls thrive in active households. They love hikes, long walks, games in the park, fetch, etc. French Bull Terriers love relaxing on the sofa too, but they do need their 1-2 hours of active play a day. This especially comes from the Miniature Bull Terrier part of their lineage. 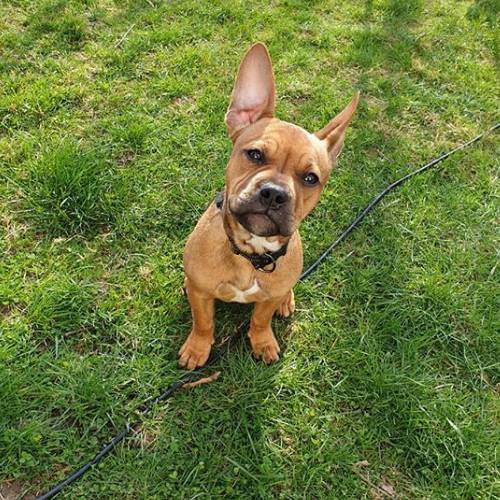 One of the downsides of owning a French Bull Terrier is their potential health issues that may crop up, as they may be inherited from both sides of their lineage. While Mini Bull terriers are a pretty healthy breed, French Bulldogs actually do have quite a few health conditions they are susceptible to.

One type of issue your French Bull Terrier may inherit from their Bulldog parent is thyroid conditions. This may include hypothyroidism (underactive thyroid), hyperthyroid (overactive thyroid), goiters (enlargement of the thyroid) and autoimmune thyroiditis. All of these conditions affect your dog’s thyroid and require careful medical management. This particularly includes hormonal replacement so that the dog’s body can maintain various body systems and organs working as they are supposed to.

Cataracts and deafness are very common in bulldogs and can be inherited by your French Bull Terrier as well.

Hip Dysplasia is fairly common for both French Bulldogs and Bull Terriers. There is some genetic predisposition to it, and it may also develop throughout life. Although not lethal, hip dysplasia may limit the dog’s activity and cause pain. You can suspect hip dysplasia in your French Bull Terrier if you notice them starting to limp, or move abnormally, or be unable to go up or down the stairs. You will likely notice decreased activity level and signs of pain during movement.

Hip Dysplasia can be prevented (or its onset can be delayed) by feeding your French Bull Terrier a nutritious diet full of protein, vitamins and minerals. Moderate exercise and avoidance of too much stress on the dog’s musculoskeletal system is also important. If you notice some of the symptoms of hip dysplasia in your pup, take them to the vet as soon as possible.

Degenerative Myelopathy is a condition common for both French Bulldogs and Mini Bull Terriers. This is a condition that involves degeneration of the spinal cord, which slowly leads to the dog’s worsening ability to control its limbs and internal organs (bladder and bowels) and progressing pain. The unfortunate thing about progressive myelopathy in dogs is that it is not something that can be cured, although the condition can be managed.

It is hard to avoid any and all health issues whatever breed you own. Researching the breed you are planning on getting is a good first step to make as safe a decision as you can when it comes to getting a healthy puppy. Although French Bull Terriers can indeed inherit some genetic health conditions from their parents, especially from the French Bulldog lineage, it is still possible to have a completely healthy puppy. To do that, it’s important to work with an excellent breeder who does thorough genetic testing of the puppies’ parents to exclude the possibility of a genetic disease.