French Bulldog Health Issues you need to know about

Pure bred dogs, especially those bred specifically to have a particular anatomic shape, height, weight, etc (such as designer dogs) often have issues resulting directly from their anatomy and body shape. This is particularly true for French Bulldogs. Of course, in addition to that, Frenchies also have some other health conditions specific for the breed, that aren’t related to their anatomy. What French Bulldog health issues should you know about and what can you do to raise a healthy pup? 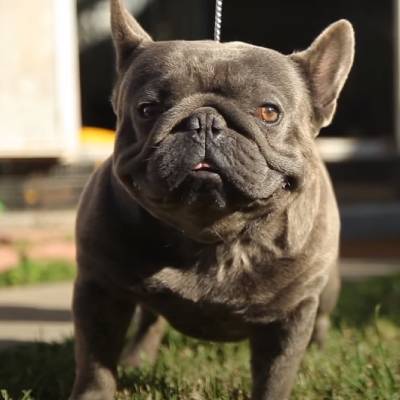 French Bulldogs do have some health conditions specific for the breed

Due to the structure of their head and nose, French Bulldogs have shorter nasal passages and the air they breath in doesn’t have enough time to warm up/cool down (depending on the weather outside). It can also lack proper level of hydration. All these factors can cause respiratory issues in your Frenchie. Something called brachycephalic breathing often occurs in French Bulldogs. You have most likely had a chance to observe it if you have ever seen a Frenchie that seems to constantly snort or even grunt as they breath. Occasional snorting during particularly exciting play is normal. But constant snorting is a pathology indicating inadequacy of the dog’s nasal passageways.

Brachycephalic breathing tends to occur more often in dogs that are overweight, or exposed to too much physical activity, which can be unhealthy.

It can also happen if your Frenchie’s nasal pathways are pathologically narrowed (in addition to them already being fairly narrow in all French Bulldogs) which then becomes an even bigger problem. 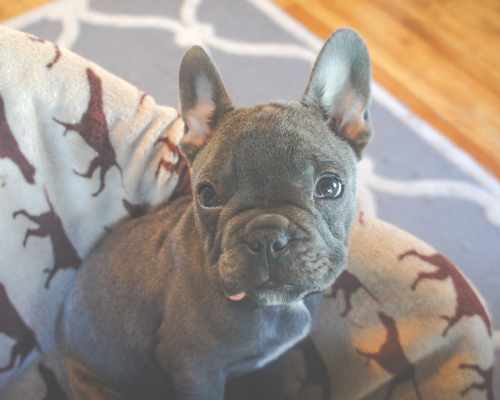 Another thing to remember with French Bulldogs is that, due to the structure of their nasal pathways, they can’t tolerate heat very well and must not be exposed to high temperatures for extended periods of time.

One other issue particular for French Bulldogs is that their heads are disproportionately heavy compared to the rest of their bodies, which makes them not be able to swim well for long periods of time. So, if you take your Frenchie to the beach, make sure they don’t stay in the water for too long, or swim too far from the shore. They really can’t handle it. No matter what they tell you 😉

Another issue stemming from the French Bulldog’s anatomy relates to their eyes and eyesight. As you know, Frenchies’ eyes are somewhat bulged out of their skull. It makes for an incredibly cute dog. But it also increases their risks of trauma to the eyes, as well as conjunctivitis. 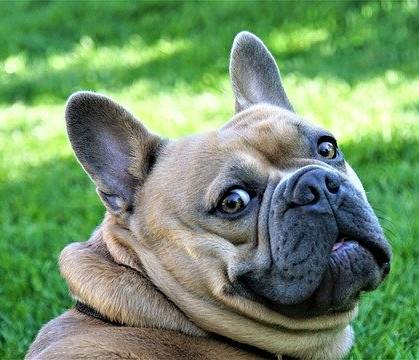 Frenchies’ eyes are somewhat bulged out of their skull

Conjunctivitis can be described as inflammation of the eye’s mucosal membrane. It is also known as “pink eye”.

Conjunctivitis isn’t related to trauma but still happens more often in the dog’s whose facial anatomy is similar to the French Bulldog’s (bulging eyes). The usual symptoms of conjunctivitis are reddening of the eyes and pus-like discharge, as well as irritation and swelling.

Many things can potentially cause pink eye in Frenchies. Allergies, blocked tear ducts, bacterial or viral infections and insect bites are some of the common causes. If you notice any signs of conjunctivitis in your Frenchie, take them to the vet immediately. Conjunctivitis in French Bulldogs is usually easily treated with a course of eye drops. 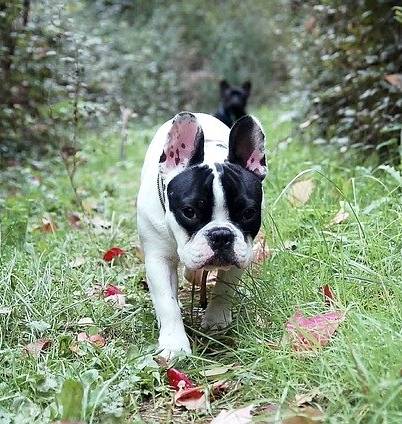 Because of their face anatomy you have to be careful walking your French Bulldog in the woods where there are lots of sticks and other potentially dangerous objects that can hurt their eyes. Normally dogs are very aware of their surroundings and are cautious enough not to hurt themselves. But if your Frenchie gets overly excited, an injury can happen. 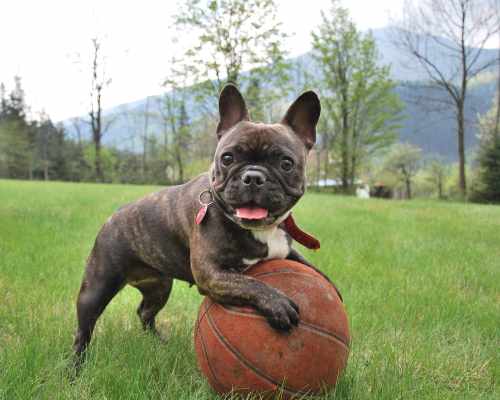 Due to their shorter body, French Bulldogs may have issues with their spine. Very often it is various spinal issues such as disc degeneration, dislocation and hernias. They can also have compressed discs. Hemi-vertebrae (abnormally shaped spinal bones) development is also possible. The latter issue is usually genetic. One dog can have one or more of these in their spine.  When there are several hemi-vetrebrae present, they normally are located next to each other.

Hemi-vertebrae is a very serious issue that can cause instability of the spinal column. Although a dog can live with this disorder, certain complications may occur that may significantly worsen the dog’s quality of life. The area around the hemi-vertebrae can become a weak point of the dogs spine, susceptible to the development of hernia or pain from physical exercise or regular movement. With time, hemi-vertebrae and spinal instability may cause pinching of the spinal cord and disc protrusion. 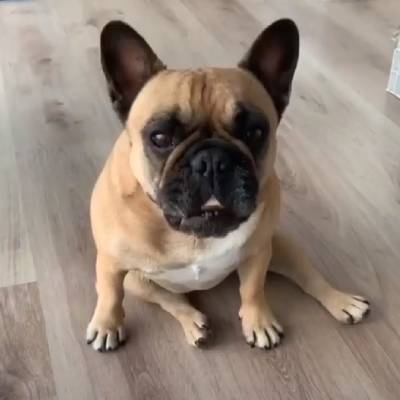 Due to their shorter body, French Bulldogs may have issues with their spine

A lot of French Bulldogs with hemi-vertebrae do not display any symptoms, but most will. Symptoms of hemi-vertebrae really depend on what area of the spine is affected, and most of them are neurological. This includes visible signs of pain, limping and loss of strength in limbs (especially hind legs), loss of bowel and/or bladder function or even paralysis. The symptoms usually get more pronounced around one year of age and increase throughout the dog’s life.

If you notice any signs that there might be something wrong with your Frenchie’s spine, take them to the vet. An X-ray is an easy way to diagnose hemi-vertebrae in a dog.

If your Frenchie is diagnosed with hemi-vertebrae, you have several options. A dog with mild neurological symptoms can be managed with medication. If the disease is more advanced, surgery may be necessary. 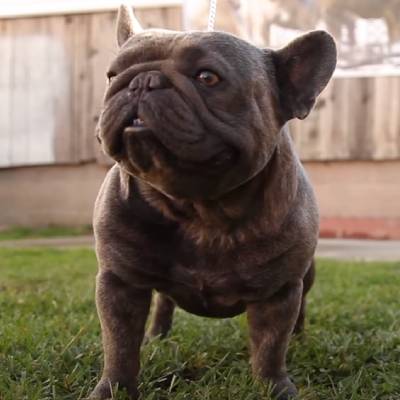 How to avoid the development of hemi-vertebrae in your French Bulldog? Unfortunately, this isn’t something in your control once the puppy is in your home. Hemi-vertebrae are genetic, and it’s up to the breeder to thoroughly test and screen their dogs before breeding to avoid passing genetic diseases onto the litter. This is why choosing a good breeder is so important. If you buy your French Bulldog from a back yard breeder, you can easily get a dog that will have grave health issues and there is not much you can do.

Some dogs have no symptoms even with extensive calcifications. Others may display signs of pain and neurological issues. These include reduced movement and mobility, reluctance to move or exercise, sensitivity to touch etc. As with hemi-vertebrae, Intervertebral Disc Disease is also considered genetic and can be avoided by careful breeding and screening out the dogs that have the condition. Treatments may include conservative therapy, or surgical interference in more advanced cases.

This is one disease that isn’t common just in French Bulldogs but any breeds. This is a condition that happens when hip and knee joints grow and develop abnormally which leads to abnormal wear and tear and, finally, dysplasia and chronic inflammation. This condition can start at any age of the dog, but, once it has started, it will most likely further progress during the course of the dog’s life. It can be somewhat mitigated by limiting the dog’s movements to a safe level where joints are not overly stressed. But it cannot be cured.

Outside of genetic factors, exercise and nutrition plays a role in the development of Hip Dysplasia, but it’s only a minor role. Some of the symptoms of hip dysplasia include stiffness, limited range of motion, limping, reluctance to move, poor muscle development and behavioral changes in the dog, which may be a sign of pain. To treat your Frenchie’s hip dysplasia, your vet may recommend anti-inflammatories, a change in diet and/or physiotherapy. In more advanced cases surgery may be needed. 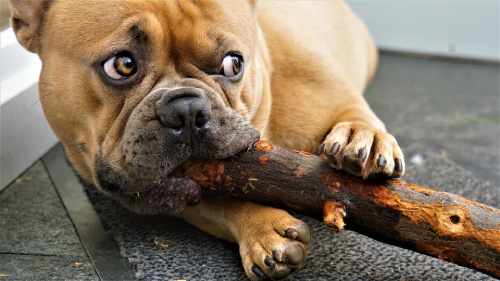 French Bulldogs are quite susceptible to various allergies, including food and environmental allergies. Food can be a particularly tricky issue. Frenchies, like many purebred dogs, may have somewhat “weak”, or sensitive stomachs and many food products can cause them allergies or sensitivities.

If your Frenchie has skin issues, such as dermatitis, or red and irritated patches on their skin, which seem to worsen after certain types of food, you may be dealing with a food allergy. In this case, it would be a good idea to do an elimination diet to see what foods your pup reacts to. If you find a culprit, you should exclude it from your dog’s diet. Some Frenchies are allergic to chicken or turkey, which is often a component of commercial dog food. They may do better on red meat only. Some can also be allergic to preservatives in the food, in which case you might have to think about feeding home-made meals. It would mean spending a lot more time preparing food for your pup, but having a healthy dog is always worth it!

Even if you are feeding your dog home-made meals, you might still have to deal with allergies. Some of the products your pup may be allergic to is eggs, dairy products, fish and processed meats. Be especially careful with treats – especially human treats like cookies and particularly anything containing chocolate. This is just nasty food for dogs, and chocolate can even be lethal!

If you are having a hard time dealing with your pup’s food allergy, it’s always a great idea to consult a dog nutritionist or a vet that has experience in nutrition. Don’t just go on feeding your Frenchie the offending food in hopes that the issue will resolve itself! 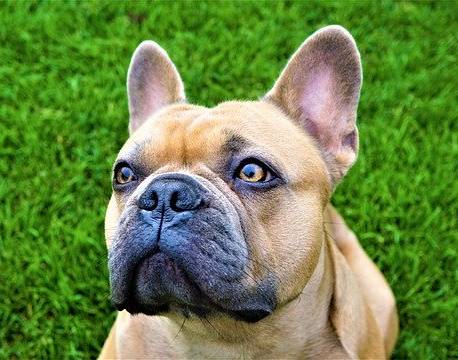 Besides food allergies, a lot of Frenchies may have environmental allergies as well. You’ll be surprised to find out, but your Frenchie may be reacting to the cleaning supplies, soaps and detergents you use in your bathroom, on your carpets etc. Just like people, some dogs are more sensitive to these factors than others. Some may require a more hypoallergenic environment than others. Although the main culprit in any allergy is usually food, do take environmental allergies into account.

Dermatitis – an inflammatory condition that affects the skin – is quite common for all breeds that have “wrinkled” skin. French Bulldogs tend to be somewhat more susceptible to it than many other breeds. One of the signs of dermatitis is red, irritated skin, especially around the mouth and nose, on the neck or belly, or between the dog’s toes. Basically, any area of the body that can have accumulation of moisture, sweat or food particles can be susceptible to dermatitis.

Irritated areas of the skin tend to itch or even hurt, which can cause discomfort to the dog. It can get even worse when the dog starts scratching the affected area. If you see the signs of dermatitis or your pup starts scratching excessively, take them to the vet. A good vet will be able to find the root cause of the dermatitis as well as prescribe medications that will calm down the irritated spots and bring your Frenchie some relief!

If you got your Frenchie puppy from a breeder, you most likely have a pet quality pup that’s already sterilized, or you are planning on sterilization in the future. A good breeder will usually ask the new owner not to have puppies from their new dog once they mature. This is because backyard breeding is an extremely harmful practice and no one should do it. It is also because breeds like French Bulldogs can have very difficult time giving birth to puppies.

More often than not Caesarian Section is used in breeding Frenchies because the mom just isn’t able to give birth on her own. I hope you will not engage in breeding French Bulldogs unless you are an experienced breeder (in which case you would not be reading this article in the first place). But if your female Frenchie does end up being pregnant, you will absolutely need help from a vet and possibly a surgical resolution of the situation.